This is the Jump Ball’s weekly TV Guide for NBA fans. We point out what games are must-watch TV each week.

Monday, 9 games on the third Monday of the league and we got a few good ones.

Anytime Gregg Popovich and Brad Stevens coach the two teams it’s going to be a great coaching battle. There is a ton of respect both ways, Pop is a legend and Stevens is rising up quite quickly. LaMarcus Aldridge and Al Horford will battle down low and this is a big test for youngster Dejounte Murray going against Kyrie Irving. Should be fun to watch.

Philadelphia 76ers (2-4) vs Houston Rockets (5-2)
The Rockets needed an Eric Gordon three from the corner to beat the Sixers last week, now they are running it back in Houston. The Sixers lost it really because of their youth but Embiid and Simmons are building some good chemistry that will help as the season goes on.

Golden State Warriors (4-3) vs Los Angeles Clippers (4-1)
This is the biggest game of the night, the Clippers have started the CP-less era on a roll and a shot at their biggest obstacle will let the league know if they are real or just the same Clippers. The Warriors have started games a bit sluggish but still have an explosive offense that can get them back in games quickly as well as some of the best closers in the league.

Tuesday, 4 games but only one that really stands out.

Oklahoma City Thunder (3-3) vs Milwaukee Bucks (4-2)
The Thunder’s road trip continues with a visit to the Mecca in Milwaukee. It’s going to be the Thunder’s Big Three versus the Greek Freak! Antetokounmpo has been on a tear to start the season and is the early front-runner for the MVP. It takes wins against teams like these to keep that momentum going.

Wednesday, nearly every team is playing with 12 games on tap.

Orlando Magic (4-2) vs Memphis Grizzlies (5-1)
Two of the biggest surprise teams in the league will square off. The Magic already has blowout wins over the Spurs and Cavs, while the Grizzlies knocked off the Warriors and Rockets. The jury is still out on whether they are both for real, but let’s ride the wave as long as we can. 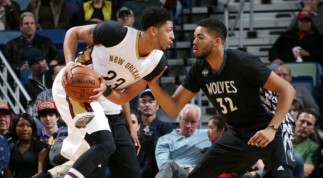 The Wolves defense is getting kicked in the teeth lately but a nice win over the Thunder last week might start to turn things around. The amount of talent in this game is staggering, two top bigs under 25 with Towns and Davis, Cousins, Butler, and Wiggins.

Portland Trail Blazers (4-2) vs Utah Jazz (3-3)
Another game between two teams that will be competing for the last few playoff spots in the West, even in November these games matter come April. The Blazers and their much-improved defense will face the Jazz in Utah. The Jazz had a bad loss in Phoenix last week so they’ll need to bounce back this week.

Thursday, only 2 games on the NBA Agenda

Golden State Warriors (4-3) vs San Antonio Spurs (4-2)
A rematch of last year’s Western Conference Finals will be lacking a little bit because Kawhi Leonard is still out with the quad injury. This is a dangerous game for the Spurs, first game at home after a long road trip can be a bit tricky. The Warriors have been sluggish to start the season but games against the Clippers and Spurs can jump-start them.

Los Angeles Lakers (2-4) vs Portland Trail Blazers (4-2)
Lonzo Ball is due for a big game, he hasn’t exploded since their win against Phoenix the first week of the season. The Blazers have improved defensively and I expect in between the third and fourth quarter for there to be a rap battle between Ball and Lillard.

Friday, After just 2 games on Thursday, we got 12 on here.

Cleveland Cavaliers (3-4) vs Washington Wizards (4-2)
The Cavs have struggled early in this season, they’ve looked very apathetic on defense but they may get amped up for the Wizards. LeBron James pays attention and I’m sure the Wizards got his when they started the season saying the Cavs tanked to avoid them in the playoffs in last year. This should be a fun game.

Boston Celtics (4-2) vs Oklahoma City Thunder (3-3)
It could take the Thunder half the season to figure out how best use their big three. The Celtics young kids Jaylen Brown and Jason Tatum have stepped up their game early averaging 15.0 and 15.2 points per game. Celtics are 2nd in defensive rating is not a shock but the Thunder being 3rd certainly is.

Saturday, 5 games on Saturday night including an old rivalry.

Memphis Grizzlies (5-1) vs Los Angeles Clippers (4-1)
Even though some of the main principals of this rivalry may be gone, but Marc Gasol, Mike Conley, Blake Griffin, and DeAndre Jordan are still there and so are their scars. Both teams started the week hot but will it last?

Golden State Warriors (4-3) vs Denver Nuggets (3-3)
The Nuggets have playoff expectations and these are some of the games you have to win at home to get into the playoffs. The Warriors will be finishing a three-game road trip although I suspect they’ll fly home after the Clipper game so it’s basically a two-game road trip.

Both of these squads are expecting to be in the top four of the East where in that mix is unclear. Both teams are a little thin on the bench but a win now can pay off down in April. This game can come down to a shoot out between John Wall and Bradley Beal vs Kyle Lowry and Demar DeRozan.

Utah Jazz (3-3) vs Houston Rockets (5-2)
The Jazz who lost Hayward is trying to figure out how to make up for his absence and still defend at the level they are used to. The Rockets are still without Chris Paul so a lot of the production on offense will fall on Harden’s shoulders. Also a battle of two different philosophies, one wants to play with speed and the other wants to slow it down.

Oklahoma City Thunder (3-3) vs Portland Trail Blazers (4-2)
The Blazers with their own big three of Dame, CJ, and Nurkic will take on Melo, Russ, and PG. These are measuring stick games, the outcome lets the Blazers know where they stand against some of the better teams in the West.