Pour some out for Grit N Grind

I have to admit, I hate the Memphis Grizzlies and ‘Grit N Grind’ but I also respect those guys as much as any NBA team I’ve worked against. With Zach Randolph leaving and imminent departure of Tony Allen, we all have to pour one out for the homies. In my eight-year NBA run, I made the playoffs five times and for three straight seasons went up against the Grizzlies in the first round. Needlessly to say I developed a strong dislike for them as we competed but always appreciated how they brought it every night.

My first run in with the Grizzlies was in 2011 when I was an assistant video coordinator in San Antonio and we were the number one seed with a 61 win season under our belt it really felt like this was our year. It was also the first year of Grit N Grind, it all started when Rudy Gay went down with a shoulder injury and it was like addition by subtraction. The Grizzlies started to grind out wins and just physically beat up teams on a nightly basis with Z-Bo leading the way.

In the last game of the season for the Spurs, Manu Ginobili hurt his elbow against the Phoenix Suns and it forced him to miss game one of the series. I don’t remember too much but it was a serious battle and without Manu, we fell to the Grizzlies by three. We won game two but the damage had been done, we lost home court advantage and the heavy underdog Grizzlies had a TON of confidence.

The city of Memphis was ready for this series despite the Monsoon like rains that came down. Even with the gloomy weather we were still confident we would win the series but this was going to be a dogfight. We went into game three confident and ready to roll but so were the Grizzlies. They built an early lead and we spent the entire night trying to chip away at it. The fans were amazing, it was just an unreal atmosphere and they were engaged all 48 minutes. They completely bought into the Grit N Grind team. I began to lose faith when we were down two with less than a minute left; the Grizzlies had the ball coming out of a timeout. Not sure if this was the play they designed by Randolph got the ball on the wing three with Tim Duncan guarding him. I just remember sitting in the back locker room breaking down the game and thinking, ‘Tim better get up on him, he can make that’ and sure enough he did. That pretty much sealed the deal for them in game three.

We would lose game four and head back to San Antonio for game five down 3 to 1. I don’t remember too many specifics but the game goes to overtime and a few Front Office execs were in the video room screaming with every big play or bad call. It was a fun night only because we won the game and stayed alive for another game. I wish I could have said the same thing about game six. We would lose the game and joined the list of one seeds to be upset by an eight seed. They would go on to lose to the Oklahoma City Thunder in the next round but little did they know, they made a new enemy in the first round, oh not the Spurs….ME!!!!

After the playoffs the NBA lockout hit and I would eventually make my Ali-like return to the Los Angeles Clippers. My return was boosted by the trade that brought in Chris Paul in this shortened season. The Clippers would return to the playoffs, some say because of Paul and lob city, but it was really my amazing video edits (not really)! As the playoff picture started to come into view I realized I would be matching up with my nemesis the Memphis Grizzlies and I wanted my vengeance. We were a young team and the Grizzlies fully embraced their identity of toughness. Game one was in Memphis and it might have been one of the most amazing games I’ve ever been a part of.

Memphis came out firing and was completely killing us, they were up 24 points with 9:13 left in the game. Then the most amazing thing happened, we started tightening our defense up and they began to make mistake after mistake. Slowly we were chipping away at their lead, but it just didn’t seem like there was enough time for us to catch them. Down 12 with less than three minutes in the game, we felt good about making them sweat and we found a few things that began to work. The thing is, there was still time left in the game and Nick Young was about to enter the picture.

Out of a time, we ran a hammer play and got Young an easy corner three to cut the lead to nine, then we got another stop and Paul in transition; he raced up the court and found Young for another corner three. Lead is down to 6. After another miss, Paul got running again and hit Young for a third consecutive corner three. The lead is down to three after being behind by 24 points only 8 minutes to go.

Down the stretch, it became a back and forth battle. Paul rejected the Reggie Evans ball screen and both defenders went with him. As Paul went up to shoot, he found Evans rolling to the basket for a layup. With the Clippers up one, the Grizzlies ran a Pick-and-Roll that got Paul switched onto Rudy Gay who took advantage of the height disparity and drilled a fadeaway for the lead. This was the Grizzlies’ first made field goal since the 9:13 mark. Paul got fouled on the next possession and nailed his two free throws. On the final play, the Grizzlies went back to Gay and this time we put Kenyon Martin on him. With his long arms and quickness, he was able to contest Gay’s shot and the Clippers pulled off an amazing comeback.

We just completed a 28-3 run and stole game one on the road. Just a year ago I was in that same backroom and crushed by the Grizzlies but now it was my turn to bring the pain!

We only led for 45.6 seconds for that game, and well it was the most important 45.6 seconds of the game. Everyone knew the Grizzlies were tough but no one knew just how tough we were. Needlessly to say, we partied pretty hard that night. None of us wanted to go to our rooms and the hotel kitchen stayed open late to let us celebrate.

This series was far from over though. We would lose game two but return home with all the monument on our side. We would games three and four by a combined five points. We felt good leading 3-1 going to Memphis, even after we lost game five we knew we get them in game six. Well, not so much. This tough ass team would not go away. There is a line early in the movie Gladiator that reminded me of this team.

Quintus:
People should know when they are conquered.
Maximus:
Would you, Quintus? Would I?

These guys just didn’t quit, and that is what Grit N Grind is all about. So there we were flying back to Memphis, to square off in a winner take all. Wi 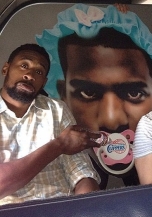 nning a game seven is hard enough, winning it on the road is damn near impossible. Both teams felt the nerves, we would go on to win by 10 in a very low scoring affair. The energy sucked dry from FedEx Forum as they shot 13 threes and made zero of them. The most noteworthy thing from the game was the fan that had a cardboard sign of Chris Paul’s face in a baby hat. Somehow it made it’s way to our locker room and on the team plane as we traveled to San Antonio for the second round. We didn’t stand a chance against the Spurs; we were exhausted physically and emotionally after battling the Grizzlies. We were spent and got swept by the Spurs.

The following season, we were on the rise. We made the playoffs last year but our plan was to win it all the next time. We were building a rivalry with them, our regular season games felt like playoff games, they didn’t like us and we damn sure didn’t like them. We seemed destined to face them in the playoffs again and everyone got what they wanted. Even Marc Gasol who would continually let our advance scout he was coming for us every chance he got.

In preparing for our match up with them I may or may not have made a highlight tape for our guys with clips of the movie Gladiator spliced in with an enough music to get our locker room rolling. We should a few final clips, then cut the lights and got the guys going! We ran them out the game in game one, 112 to 91. I know I didn’t play a minute or even call a timeout but I’m taking credit for this one!!! We would grind a game two win behind a Paul game winner.

Everything was rolling for us; we are confident and know we are in the driver seat but remember they nearly came back from a 3-1 deficit last year. This team is tough, we know how dangerous they can be and the fans were ready for us. Grit N Grind was not just something that described the team but it described the city of Memphis. They loved their Grizzlies and they were loved back. Even the people in the Starbucks in the hotel were talking trash to me and it only got worse when they won game three. Walking into that Starbucks in between games three and four was just another round of trash talking in a purely friendly way. The Grizzlies would win game four and despite Paul putting up 35, they would beat us in game five.

It is amazing how quickly you can go from up 2-0 to facing elimination in game six. Things got even worse when Blake Griffin rolled his ankle badly when he landed on Lamar Odom’s foot in practice. Coach decided that we would start Odom since Griffin was not 100% and it just made things harder. To the Grizzlies credit, they came back down 0-2 and took care of business in game six. Their toughness was just too much for our squad.

I hated the Grizzlies since they took away my best chance to win a championship in 2011 and I probably won’t let that go. It was my battles with them when I was with the Clippers I learned to respect them and even, in the end, might have come around to liking them. It is sad to see the end of the Grit N Grind era, they were a thorn for every team that faced them in the playoffs. They challenged the Warriors, Spurs, Thunder, and Clippers over the years. They were the team that even if you beat them, they still beat you because it took all you had to take them on. So, I ask everyone to pour some out for Grit N Grind, for Zach Randolph, for Tony Allen, for Marc Gasol, for Mike Conley and their fans.