Hayward is the first Domino in NBA Free Agency

Almost on an annual basis NBA Free Agency has been held up by one or two dominoes before it really kicks off. Last year it Kevin Durant, and this year it is the Utah Jazz’s Gordon Hayward. There is no question that deals will be announced as soon as the clock strikes 12:01 AM July 1st but nothing major will be agreed to until Hayward decides what jersey he wants to wear next season. With meetings set up with the Boston Celtics, Miami Heat, and his current team the Jazz. Hayward’s decision will set up a chain of events that can change the landscape of the NBA.

If Hayward chooses to stay in Utah, this will position the Jazz in a good position to bringing back their other big free agent in George Hill and possibly although not a lock Joe Ingles. From there the Jazz can continue to compete but at best would still only be the fourth seed in the West and probably not good enough to beat the Golden State Warriors in a playoff series.

If he leaves than things get really difficult for the Jazz. Presumably, Hill would not want to return without Hayward there. This was one of the reasons that they did not come to an agreement on a contract extension during the season. Ingles will receive a ton of interest around the league, as teams are looking for more 3-D players. Ingles’ defense in their series against the Los Angeles Clippers definitely raised a few eyebrows. The West is getting tougher with Jimmy Butler joining the young Minnesota Timberwolves and the Denver Nuggets were knocking on the door of a playoff birth last year. Losing these guys would put them at risk of not making the playoffs next season. 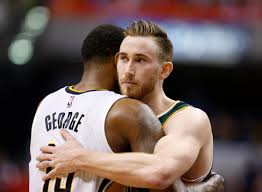 The Celtics have been trying to set themselves up to sign Hayward and then trade some of their assets for Paul George. This is Danny Ainge’s dream scenario and something that can become a reality if everything falls into place. The Celtics with a core of Isaiah Thomas, Al Horford, Hayward, and George could be enough to challenge Cleveland in the weakened Eastern Conference.

If Hayward does not go to Boston, the Celtics could turn to trying to lure Blake Griffin out of the Clippers’ red, white, and blue jersey for the Celtics’ green. They would still be in the hunt as well for The Celtics’ know that this is the last season they can be players in the free-agent market with Thomas and Avery Bradley in the last year of their deals and Marcus Smart heading into restricted free agency.

If the Celtics cannot get one of their coveted free agents, it would not make sense for them to trade their assets for Paul George who is a free agent next year and has made it public that he plans on signing with the Los Angeles Lakers next summer. It is a smart risk with either Hayward or Griffin in the fold and a possible finals run but a really silly one if they strike out in free agency in this deal. They would be better off holding onto their assets and be ready to pounce if Anthony Davis becomes available next year.

As long as Pat Riley is the shot caller for the Heat, they are the team that your girlfriend tells you not to worry about, **spoiler alert** you should worry, A LOT! Riley has a way of talking players into signing with them, despite having a rough go the last two years with LeBron James and Dwayne Wade leaving he still maintains that aura. He must be hell bent on bringing in a free agent and righting his reputation.

Hayward will fill a gaping hole at the shooting guard position that has been vacant since Wade left. The Heat fell short by a game last season on missing the playoffs after starting 11-30 and Hayward would certainly put them as a lock for the playoffs next year. Pairing Hayward with the often overlooked Goran Dragic, the mercurial Hassan Whiteside, and Justice Winslow who is coming off an injury would definitely put the Heat back on the map but not quite in contention yet.

If Riley misses out on Hayward look for him to battle for the rights to sign Griffin in south beach. This is actually a better fit for the Heat than even Hayward. Griffin could leave the Clippers to join a time that could be a better version of the Clippers. Whiteside can play the DeAndre Jordan role on the defensive end and has a better offensive game. Dragic is no Chris Paul but he can play and would be a great pair in the Pick-and-Roll. Griffin can really unleash his playmaking ability with this group and if they make the playoffs he would be hailed as the hero of South Beach.

If they are not able to attract any of their free agents, they can turn bring back all of their own guys and battle it out for the 8th or 7th seed. The bigger damage would be to the mystique of Riley’s sales pitch skills. It would be the third year in a row that free agency did not turn out the way the Heat had hoped for.

The Rockets are not in the running to sign Hayward and made their big move by trading for Chris Paul. However they are linked to Hayward because should he choose to not sign with the Celtics, it opens the door for them to possibly make a trade for Paul George. The Indiana Pacers could be left with one less suitor if the Celtics drop out of the running for him and also lowering the price on him. Daryl Morey is a risk taker and a great deal maker, a trade for George is right up his alley. If they can’t get George, the Rockets turn their attention on trying to sign Paul Milisap or Danilo Gallinari.

The more suitors that drop out of the George sweepstakes the better positioned the Lakers are to sign him in the summer of 2018. The worst case for the Lakers is that George gets traded to Boston, has instant success that makes it hard to leave a playoff team for a group of young kids who may win 30 games if everything goes right. It would hurt even more for the Lakers to see him don the Celtic Green.

Hayward’s free agency is going to be the domino that can trigger a massive amount of movement amongst players. Teams like the Jazz, Celtics, Heat, Indiana, Rockets, and Lakers are all affected by his decision either directly or indirectly. Each of these front offices will have to be prepared for so many different scenarios. If Hayward takes a long time to decide his future, free agency may stall a bit but these teams in the hunt will not be making moves until this first domino falls.