The Spurs venturing into the Dark Side

All through the season the San Antonio Spurs trusted in the force, but in game four of their playoff series versus the Oklahoma City Thunder they stepped into the dark side of one on one basketball. In the fourth quarter in particular, the ball stopped moving, there was less cutting and the Thunder played exceptional defense.

All through the season the Spurs have been one of the best passing teams in the NBA, finishing third in the regular season at 24.5 assists per game. They also finished fifth in passes made per game at 331.7, nearly eight more than the Golden State Warriors high octane offense.

The Thunder was able to take the game, behind Kevin Durant’s brilliant offensive performance and great one on one defense. The Thunder accomplished what most teams are unable to do against the Spurs and play them straight up.

In the play below, Steven Adams does a great job of standing his ground on LaMarcus Aldridge. The Spurs come down and just immediately post Aldridge without getting any movement. Aldridge has already been pushed off the block by Adams. He tries to back him down but is forced into a tough jump hook in traffic.

Aldridge goes so quickly he doesn’t let his teammates fill the vacant spots and if Danny Green sprints a little faster into view he would be open at the top of the key for a kick-out three. A play that is very natural for the Spurs when they trust in the force. 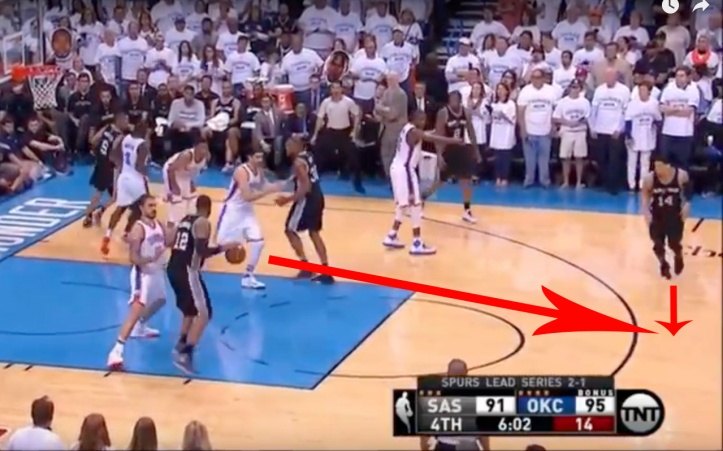 Later in the fourth, the Spurs post up Kawhi Leonard on Durant who does a great job forcing Leonard into a step back fadeaway after a few dribbles to the middle. Again there is no movement or cuts from the other Spurs. It is strictly a one on one play, which plays right into the Thunder’s hands.

OKC was able to defend the Spurs without sending a double team and that kept them out of rotations. The Spurs, who average nearly 22 assists per game, finished game four with a season low 12 assists and only one in the final frame. The Spurs who average 52.3 points off assists in the playoffs were held to just 26 in this game. The Thunder tied the series with great defense and forced the Spurs to play outside of their system.

It was a role reversal where the Thunder had the ball flying all over the court and the Spurs were the ones playing hero ball at the end. Just coming down and running post isolation plays for Aldridge and Leonard will not get the ball humming around the court like it did in the regular season. The Spurs will have to trust in the force or otherwise this season will quickly be lost to the dark side.